People of a Feather Show Us Why Sustainability Matters

The solemn faces of the family speak volumes as they sit riveted watching the TV images of a hydro dam, a chain of reservoirs and effects upon the water, while David Suzuki explains what they already know. Their healthy, self-sustaining way of life is threatened unless the growing hydroelectric complex can be replaced by alternative technologies for energy production to meet the demands of people further south.

The challenge presented in this film People of a Feather is, can people in north-eastern North America recognize that the issues facing the Inuit in the north today also impacts on our future, to motivate us sufficiently to support appropriate changes in our energy consumption?

People of a Feather is a visually stunning, and important, documentary story, receiving 12 major awards to date. The 2011 film powerfully illustrates, to viewers globally, how our lives are inextricably linked on this planet – environmentally – in ways not previously experienced in human history.

In this story, the Inuit of the Sanikiluaq community on the Belcher Islands in Hudson Bay, Canada, show us the yin-yang of relying on the world of Nature for survival. They practice gentle respect at the same time as tough pragmatism, in relation with other species, to do what is necessary for sustainable living in the Arctic.

Previously I have written about the need for us to pay attention to those maverick thinkers and practitioners in the sciences, and other disciplines. I refer to those who research and apply the re-awakened wisdom of holistic insights, honed through millennia, juxtaposed to the latest scientific technologies.

Joel Heath, ecologist and filmmaker of People of a Feather, shows individuals of all ages what it takes, in my opinion, to become such a maverick. Doing so requires particular qualities, such as having an inquisitive mind matched by a passionate heart. The third key quality is to have what the Buddhists call “a beginner’s mind.”

We witness Heath’s implicit openness and grace to pursue his work, by learning from the natural environment and the people – experientially, on the ground. He then uses the latest scientific technologies with local, traditional Indigenous knowledge to understand the sea ice ecosystem.

In People of a Feather, we see the transformative and healing power between two cultures – Indigenous and Western – when people work together as equals, in mutual respect, fully appreciating what each can offer the other, for the wider benefit of humanity and the earth. This relationship is a pertinent cross-cultural partnership model for our time, locally and globally.

When Joel Heath responded to the Sanikiluaq community’s call to The Canadian Wildlife Service for someone to visit and investigate why the eider ducks experienced a die-off, he did not realize that he was beginning a scientific, and personal, odyssey.

People of a Feather‘s heartfelt tenderness, shown through friendships and Inuit family life, provides the emotional arc that carries us through a visually beautiful story of discovery that has multiple layers.

The tenderness goes beyond human relationships. For the other key characters in this film are the eider ducks, upon whom the Inuit have relied for food through many centuries. The eider skins and feathers, historically, were sewn together for clothing. Today, the Inuit still collect the eider down, which provides the essential warmth as an inner lining for contemporary winter clothing.

A few scenes provide historic re-enactments that show us the continuity of traditions. We see an Inuit family gently collecting just

a few eggs from various eider duck nests along a shoreline. They also carefully pull away portions of the eider down nest material from several nests, always leaving enough to cushion and surround the remaining eggs.

The Inuit also hunt the eider duck, which is a staple of their diet, as is the seal. These “country foods” still hold a central place in their diet, keeping the people healthy, because all of the nutrients remain in foods raw or freshly cooked. Eating the meat and marrow of the seal and duck, furthermore, provide body heat essential during the cold arctic months.

Simeonie is the pivotal character in People of a Feather. Through his interactions, we receive glimpses into family and community life in Sanikiluaq. A work shed appears to be the main gathering place for the men, who collaborate to build a qamotiq (sled) among other activities. We see Simeonie good-naturedly attempt to create a sound gadget for the youth, whom we see elsewhere enjoying hip-hop music. Later, he shows his son how to handle a harpoon for hunting seal.

Early in the film, Simeonie visits Joel at his look-out hut. This small, box-like wooden structure is where Joel spent many hours video-taping the eider ducks underwater. Other times he filmed them on the land and the moving ice, through all the seasons for five years.

The film also incorporates time-lapse cinematography, to show the shrinking polynyas and their effect on the eider duck. A `polynya’ is an area of open water surrounded by sea ice that remains open throughout the winter due to strong currents.

Eider ducks do not migrate, but instead stay in the north all year. To survive, they travel with the currents and moving sea ice, to find accessible ice openings, in order to retrieve urchins, mussels and other types of food.

Heath’s fascinating underwater footage reveals the food quest of the eider ducks, as they dive to the bottom, grab and hold onto their catch with their beak, then soar upwards to the surface, with a streamlined elegance that takes your breath away. 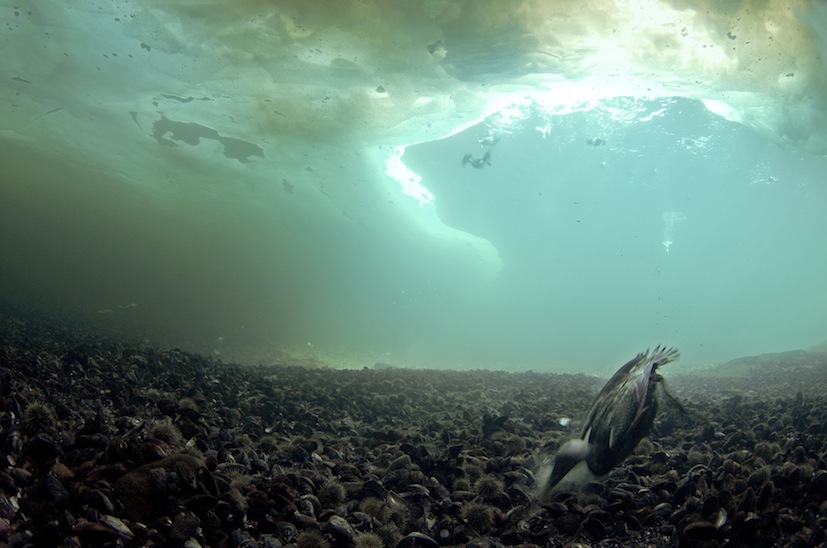 The problem, heartbreaking to watch in the film, is the shrinking of available polynyas, so that the ducks cannot dive and, when they can, sometimes cannot find an opening to surface again. The change in sea ice also is dramatically affecting other marine life.

This environmental phenomenon began close to 40 years ago, and the Inuit of Belcher Islands were among the first to see the consequences of the building of dams by the growing hydroelectric complex. An Inuk woman, in voice-over narration over hydro images, explains:

“In the winter, fresh water on our lakes and ponds is the first to freeze. Sea ice takes much longer. In spring, fresh melting water from the mainland would flood our seas and drive our currents. But in the 1970s things started to change. Many rivers were dammed, trapping our fresh water in reservoirs. Now our spring water sits there all summer getting warm until in the wintertime people down south get cold and turn up their thermostats, using more power. For almost 40 years now, reservoirs have dumped their water onto the sea ice habitats of Hudson Bay at the opposite time of year.”

Film scenes show Inuit hunters discussing their concerns; for they experience more difficulties in gathering food. Their lives even can be endangered travelling across ice that now is unpredictable. Heath, in a voice-over, explains that fresh water freezes at a much warmer temperature than salt water, causing it to be more brittle, hence unsafe.

People of a Feather is a significant window into seeing the actual implications of climate change. Such insights can inspire the choices we make today and in the future.

That fact is the bigger message in Heath’s film, a revelation that presented itself to him as his quest unfolded, beyond the initial search to identify the cause of the eider duck die-offs: “The deeper I dug, the bigger I realized the scale of the issue.”

What Heath eventually recognized was astounding. In the film he tells us, in more detail, how the changes in the Labrador current are impacting on the Gulf Stream to Europe. “This process drives our ocean circulation and our global climate…Globally, over 50% of accessible fresh water is now behind dams. We’re working against the seasons of our hydrological cycle. We still have a lot to learn.”

Heath remains committed in this pursuit. He has set up Arctic Eider Society to train the Inuit people in a multi-community network, for research and monitoring that will be used for education and outreach. The website presents updated descriptions.

People of a Feather has a theatrical release in New York City later this year. Heath hopes that the large screenings in New York, and elsewhere, will persuade audiences to support, maybe even create, initiatives to develop energy solutions for the future that can be alternatives to the presently expanding hydroelectric complex.

Meanwhile, a DVD version of People of a Feather now is available, that includes an educational package with lesson plans, plus Special Features and Behind the Scenes short clips. These range from traditional skills to eider studies and monitoring techniques, as the Inuit interweave best practices from their cultural values and today’s sciences.

All profits from DVD sales go to the Arctic Eider Society.