Do You Know Where You Live? May I Suggest – A Bioregion

Well, folks, the gloves are off. I now can identify the real reason that motivated me to write this post. Several municipal councils in my region are considering a proposal to bury high level nuclear waste here. Different strategies are essential to challenge councils even considering such a proposal. As  examples: Be a member of a Community Liaison Committee (CLC) in one’s municipality and/or be a proactive citizen within a coalition of concerned citizens across the county to fight against this nuclear-based vision for the future. Earlier today, I received an email telling me that I was not selected to be a CLC member.

In the interview some days ago, I did point out that my life’s work has been devoted to activities that help human beings connect with each other and, at the same time, to reconnect with the earth and understand how our existence depends on the well being of the planetary life support system. I also emphasized the moral responsibility for councillors and CLC members to seek out scientific, and related, research that is independent from the massive amount of materials fed to councils by the nuclear industry.

I concluded by saying that if I were not selected, my hope is that someone will be selected who will raise tough questions, particularly given the fact that a representative from the Nuclear Waste Management Organization (NWMO) will be attending every committee meeting. Will a democratic, well-informed debate on the complex aspects of this project really be possible at all? A person might wonder, and time will tell.

Meanwhile, I apologize to my loyal blog readers that my posts are less frequent, and will continue to be so through the coming months. Please understand that I have been devoting huge blocks of time to doing scientific and related research. In other words, I am “walking the talk,” connecting with my larger blog themes through the lived experience of interrelating environmental awareness with psychology and spirituality.

Last week, for example, after extensive research, I submitted an intervention to the Canadian Environmental Assessment Agency (CEAA), in reference to another Deep Geological Repository Project, which is focused on the burial of low and intermediate level nuclear waste, next to Lake Huron. For an insightful education, I recommend reading many comments besides mine. Go to the CEAA website, scroll down to “Documents” and then click “Comments Received/Responses.” My post is Doc #1139, dated May 24, 2013.

The folks in Michigan, USA, are furious, and so they should be. Michigan senators, in fact, passed a resolution with remarkable speed “calling on Ontario power officials to answer questions before proceeding with a controversial nuclear waste storage project,” according to reporter Jim Lynch, in The Detroit News online May 22, 2013.

I invite more Americans to speak out, who live in the Great Lakes region. For the battle against this outrageous project is just beginning to heat up, and we need to stand together as planetary citizens and put pressure on every level of government, to stop it. Consider signing this petition too at STOP THE GREAT LAKES NUCLEAR DUMP, as many Americans and Canadians already have done.

To date, I have more American readers than Canadian who enjoy my blog, and thank you for your interest. As you know, given its title “The Yin-Yang of Life,” my intention is to inspire and motivate people to life-affirming action through the human heart, and a “good mind” in its holistic Indigenous meaning. I prefer to highlight examples of caring. But, at times, to make effective change we need to name the problems that potentially can obstruct us from moving forward.

To do spiritual work authentically, and educational work that is transformative, requires confronting the darkness and trying to shift human consciousness.

So, when I refer to the “sacred feminine” as one of my ongoing blog themes, this reference is not romantic piffle, yet instead speaks to the essence of life itself, that so many people tragically seem to have forgotten in our troubled world. Here I will paraphrase a segment from an earlier blog post focused on Blessed Unrest, a book that can inspire and motivate, raising our hope and moving us beyond despair.

Its author Paul Hawken reminds us that the historical era called the Axial Age probably was not perceived as an age of spiritual awakening by the people living through it. That era was a period when great prophets came to the forefront, whom he suggests we (collectively speaking) revere today, in contrast to their own lifetimes when they were reviled.

Hawken suggests that there are parallels between then and now. In today’s troubled world, at the same time, there is an awakening. The evidence for it resides in a global movement which “sees the feminine as sacred and holy, and it recognizes the wisdom of indigenous peoples all over the world from Africa to Nunavut.”

I advocate, in fact, that it is through our own caring about our respective grassroots communities, whether city-based or countryside, where we first need to take initiatives to protect our land and water – and make it known to those politicians who refuse to be engaged in such protection that their inaction is not good enough.

One root cause of inaction, I sincerely believe, by our fellow human beings – including the local politicians where I live – is the simple lack of awareness by them that they live not merely in a town or even a county, but rather in a “bioregion.” In contrast, the poorest and least (schooling) “educated” land-based folks on this planet have a much deeper awareness about what sustains life than many so-called educated people in the developed world. That truth ought to humble us. Here is a simple definition on its multi-layered reality:

“bioregion: a distinct area with coherent and interconnected plant and animal communities, and natural systems, often defined by a watershed. A bioregion is a whole `life-place’ with unique requirements for human inhabitation so that it will not be disrupted and injured” [Planet Drum Foundation]. 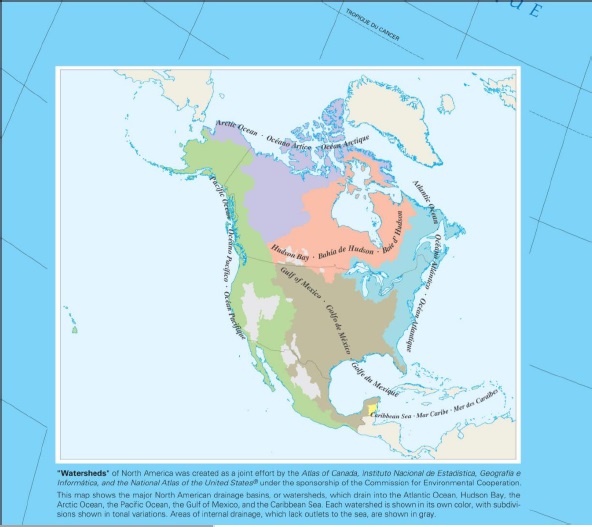 Ordinary citizens, however, are capable of creatively drawing their own bioregional maps, as a paper by Ben Johnson illustrates in “What is Bioregional Mapping?“

Interestingly, an OMNR statement reads: “The loss of biological diversity is second only to nuclear warfare in its threat to human and other life on this planet.” As for the proposals to bury nuclear waste, in a local news item dated May 24, 2013, Kathleen Wynne, Premier of Ontario, is quoted as saying: “they have to be sure all safety precautions are put in place and strict guidelines are followed.” The mind boggles.

The sad fact is, lack of awareness in regard to human interconnectedness with all other biological organisms on this planet remains predominant, at all levels of government and other institutions, as well as among too many uninformed citizens.

I recall first learning about biodiversity, and the need to take life-affirming environmental actions, as far back as the 1970s, in university. Today, the great powers of the world, politically and economically, still are stumbling towards that possible enlightenment.

We are living in the United Nations Decade of Biodiversity, 2011 to 2020. Who knew? Norway this past week hosted a UN Conference on Ecology and Economy for a Sustainable Society, May 27-31, 2013. Braulio F. De Souza, Executive Secretary of the Convention on Biological Diversity made a seven-page statement titled “Advancing Strategic `Goal A’ of the Aichi Targets (that include five goals and 20 targets).”

A number of De Souza’s points, in my opinion, merely state the obvious to anyone who hasn’t been living under a rock during the past several decades. Apparently the four targets of `Goal A’ are intended to raise awareness about biodiversity and causes of its loss through society by 2020. Oh. Thank you.

De Souza makes the plea not to “repeat our failure to meet the 2010 target,” identifying why progress was undermined as “relentless pressure from unsustainable activities.” No kidding. Could such activities be the increasing destruction of bioregions and ecosystems by industrial activities of multinational corporations, who disregard and/or co-opt government laws, globally?

Who can we look to as leaders and mentors? One such beautiful soul is in the person of the late Peter Berg (1937-2011), who founded Planet Drum Foundation in 1973, and never looked back, upon introducing and developing the concept of bioregionalism.

As closing inspiration, I highly recommend a short video on his organization’s website, opening page, scrolling down to click “Bioregional Ecology Workshop.” Please note that his words are vitally important regardless where you live, and his workshop excerpt also offers a delightful example of engaging a group of people to create their own maps, in taking ownership of how to understand better the bioregion that they inhabit.

More poignant is to know that Peter Berg conducted this workshop bravely not long before his passing, from a sudden case of pneumonia complicated by his bout with lung cancer.

2 Responses to Do You Know Where You Live? May I Suggest – A Bioregion