Indigenous Prophecies I – Mayan Shift of the Ages

Thirty years ago I made a commitment that led me down a spiritual road of learning that I initially had not sought, nor anticipated, yet which indelibly transformed my consciousness. The commitment was to become a messenger to build cross-cultural understanding between my Euro-western culture and Indigenous cultures. The journey has been outer and inner at many levels, outside and within mainstream North American culture and, inevitably, within my own soul.

Cultural knowledge that I acquired was gifted to me through the trust that I earned from many Aboriginal people mostly in Canada – First Nations (Indian), Metis and Inuit – through my interviews with them and, more importantly, the factual way in which I presented their perspectives. They saw my work not only in mainstream news media but also published in their own newspapers and magazines (before Canada’s federal government cut grants, silencing most regionally-based Native media).

The spiritually traditional people observed my genuine interest to learn about their cultural ways, through my regular presence at elders’ gatherings as well as numerous conferences during the renaissance of Aboriginal culture in the 1980s. The unexpected further gift, therefore, was to be invited to traditional ceremonies, in First Nation communities where I visited for other journalistic reasons.

At these various types of events, I was privileged to witness the extraordinary orations of spiritual teachers and healers, and also political leaders, many of whom since then have crossed over to the world of Spirit. Their orations were extraordinary, first of all, because of the poetic beauty and powerful use of language. Also profoundly impressive was the depth and breadth of understanding about their own cultural histories and spiritual values – that they lived experientially each day – and their no nonsense clarity and critique about the consequences of centuries of colonialism that have continued, unresolved.

As well, even then in those early years of my own journey, I heard the Mayan and Hopi prophecies that very recently have received cursory mention at best, if at all, in mainstream media. Worse, yet not surprising, are the further distortions and sceptic dismissals, because of the emphasis placed on a 2012 apocalypse – to make money – in constructed TV documentaries and entertaining movies indicating the end of the world was supposed to happen, instantly. For the reason that the world did not end and we still are here, ancient prophecies, Indigenous and otherwise, once again are yesterday’s news.

Regardless, may Spirit bless the resilience and perseverance of the traditional Indigenous people who relentlessly continue to go forth and share the wisdom in their spiritual teachings to whoever has an intelligent mind and caring heart to listen and learn. For the traditional elders understand their spiritual responsibility not simply to teach and pass on perennial insights to apprentices. Their task as they see it, moreover, includes raising awareness, throughout the human family, about the essential need to live more harmoniously with each other and awaken our interrelationships with all planetary life.

This message – lovingly – is communicated in an important documentary titled Shift of the Ages. The film focuses on the story of 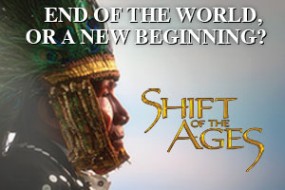 one Mayan spiritual elder’s quest to relate the truth about the message in the much talked about, yet often misunderstood, Mayan Long Count Calendar – and more. What this particular Mayan calendar importantly predicted was not the end of the world per se, but instead the fact we are entering a new cycle during “a period of rapid transition spanning the end of one cycle and beginning of another.” This new cycle is referred to as the `Great Change of Suns.’

Shift of the Ages maps the quest of Don Alejandro Cirilo Perez Oxlaq, the Grand Elder of the Mayan people as a mystical Aj Q’ji, and Day Keeper of tradition. He also is known simply as Grandfather or “Tata” more familiarly among his Mayan people. His spirit name is Wakatel Utiw, “Wandering Wolf” in English, given to him during a spiritual initiation on a mountain top, as a youth.

As the film story begins, we see Don Alejandro sleeping, followed by a sequence of fleeting images that evoke the dreams in his sleeping consciousness. They juxtapose visions with the reality of the present day frenzied, out-of-balance, and imperilled, global human and environmental condition.

These evocative images, in turn, through the film are juxtaposed to the visual beauty of the rainbow-coloured Mayan ceremonial clothing and also the awesome magnificence of ancient architecture and the world of Nature, cinematically to engage us in our body, our emotions, and our senses, to facilitate the connection between our mind and our soul, as the story unfolds.

The website for Shift of the Ages thoroughly outlines the film’s synopsis, with added sections of information about Mayan knowledge and related links. In my post here, I instead want to focus on a few highlights in the film, and why I encourage my readers to enjoy the beauty of this insightful story.

One important highlight in it is to clarify the confusion about the Mayan calendar. Mayan spiritual elder Rosa Maria Cabrera explains that the Long Count Calendar is only one among a number of Mayan calendars. She explains how Mayan time is cyclical rather than linear, and the distinction between the Long Count calendar and the sacred Cholquij calendar as related to Don Alejandro’s role as a Day Keeper.

The film story’s several layers, therefore, offer more than a biography about Don Alejandro and his responsibility to fulfil a spiritual destiny. The story includes voices of other spiritual elders and guides, men and women, Mayan and from other Indigenous nations, who communicate insights to deepen the viewer’s understanding.

We hear about the Continental Council of Elders and Spiritual Guides of the Americas, while we see Don Alejandro travelling widely to communicate his message. These travels span a seven year period after a synchronistic meeting between filmmaker Steve Copeland and the Mayan elder. Don Alejandro invites Copeland to document this portion of his mission, to dispel “end of the world” misconceptions of Mayan prophecy.

Synchronicity, by the way, is key to awakening possibility for spiritual events to unfold, when a person is willing to be receptive to the unexpected. I know this phenomenon to be true, given my own serendipitous adventures. Experiencing it is why I give Steve Copeland full points for staying the course to be taken along a journey, not knowing the destination. Doing so, of course, also creates a more powerful documentary film.

Speaking of intrigue and the inevitable emotional arc that strengthens a good story, the further layer in Shift of the Ages is an aura of suspense through the second part of the film, as Don Alejandro seeks to recover an ancient Mayan spiritual Staff of Authority passed down from his ancestors through 2,000 years.

I will leave you, dear reader, in suspense as to whether or not he recovers the Staff. What I will tell you, however, is how beautifully instructive it is to watch how Don Alejandro addresses this dilemma. The reason is, his approach is a spiritual teaching for the viewer, in and of itself.

Essentially, he travels not once, but twice, to places where he undertakes rituals for spiritual guidance in regard to how he ought to proceed, to get back the Staff. For he generously had shared the Staff through the years with elders in other nations, who always returned it, until a particular Bolivian elder decided to keep it and use it for personal political gain.

Historically, the Indigenous peoples of the Americas had close ties at many levels, from ceremonial to trade, until colonial powers ruptured these ties through strategies to destroy Indigenous cultures from the inside out – spiritually, socially, economically, and politically. Part of Don Alejandro’s quest is to mend those broken ties through a series of gatherings among tribal nation members of the above-identified Continental Council.

Hereditary Chief Phil Lane, Jr., a representative from North America, speaks on camera about the ancestral wound and intergenerational trauma still to be healed. As part of his own multi-faceted work through many years, he has launched business partnerships between Indigenous peoples in the North and the South. He characterizes the symbolism of the Eagle as masculine, focused on the mind.

Grandmother Elizabeth Araujo – who explains earlier in the film the world of Spirit experienced by Don Alejandro – further identifies the masculine emphasis in the North as the reason why technology is so advanced. Speaking to the need for balance, she describes the feminine of the South as a “more mellow and softer energy, a lot of heart and connection with the earth.” Grandmother Elizabeth is an Aj Q’ij who works with women internationally, and also travels with Don Alejandro in the role of translator.

The purpose, ultimately, in bringing together the Indigenous people of North and South is to align the best of what each of these principles bring to human wholeness. (In a few of my earlier posts, I have referred to the need for alignment of the feminine and masculine principles in Western culture. See, for example, The Alphabet Versus the Goddess – Ways to Perceive Reality.)

Shift of the Ages speaks to our time, a time of turbulence that will continue and intensify. As we enter this new cycle, the imperative more than ever is for us as a human species to adapt more harmonious and respectful ways to walk on this earth, while preparing ourselves for a challenging future.

A wonderful gift for yourself, to bring in the new year of 2013, is to watch Shift of the Ages, available FREE online until January 15th. At a future time, DVDs also will be available to buy. Also consider the possibility to host a screening.

Donations until January 15th are optional yet, of course, appreciated. Read how the donations will be used, clearly explained on the website, for example, to support Don Alejandro in future travels for his spiritual work and also related to the work of CommonPassion.org, one of the major contributors behind this film production.

Please know that any film productions and books that I recommend is done in accordance with my personal choice, without payment from filmmakers and authors nor at their request. Also, I carefully explore, on the internet and elsewhere, who and what are behind projects that I support.

Blessings for a Happy New Year, and with my gratitude for taking your valuable time to read my blog.

2 Responses to Indigenous Prophecies I – Mayan Shift of the Ages