Posted on January 8, 2013 by sandy-awakening

In 1994, I witnessed a noteworthy historic moment, at an international Indigenous film festival held at Scottsdale, Arizona. This event happened when issues of cultural appropriation and identity politics were being hotly debated in the academy and in popular culture during the 1990s, and at a peak. One of the few non-Natives present – as a freelance journalist writing for two Native American magazines – an unanticipated Hopi declaration made me wish I could disappear through a crack in the wall, from cultural embarrassment.

For the first time in history, the Hopi had closed their community, Hotevilla, to outsiders for an undetermined period. This decision was not taken easily, because the Hopi – as filmmaker/photographer Victor Masayesva, Jr., pointed out – always had been the most hospitable to brothers and sisters from the four directions, who brought good hearts and a willingness to learn. The closed doors now specifically were aimed at the White brothers and sisters, because some visitors violated the Hopi trust.

The foremost theme of the panel discussions at this film festival was the issue of cultural appropriation of Indigenous spirituality, most particularly in regard to its exploitation for purposes of entertainment and, ultimately, self-serving commercial revenues by primarily non-Indigenous people.

The atmosphere of the film festival auditorium was electric with outrage throughout these discussions. The final straw, however, described by Masayesva, was the Hopi people welcoming a certain group of visitors. The Hopi later discovered that these visitors had ulterior motives, namely, to glean information about the Kachina ceremonial figures, subsequently to re-create as cartoon characters.

In quickly browsing a website for Marvel Comics, still available are at least two comic book series in which a Kachina character is included, yet sorely misrepresented. This is a disgrace, in my view. For I totally understand the outrage by Indigenous people, who continuously have suffered one indignity after another as a consequence of the willful ignorance in Western society, systemically, in regard to Indigenous spirituality.

And, by the way, such disrespect – increasing in regard to spiritual traditions of all human cultures – is one of the signs, according to Hopi prophecy, that human beings now have arrived at the time of the `Great Purification.’

As a disillusioned journalist by the late 1980s, and awakened as a media literacy educator, several of my published writings, in journalism and education, spoke to the painfully visible trajectory of a consumer and celebrity Western mainstream culture. This trajectory, foisted upon other cultures as well, has sought to reduce every person and every other life form on this planet into a consumer, commodity or marketplace – in other words, to value life foremost in terms of money. For many years, therefore, I have seen what is coming, and it has saddened me, because today’s growing chaos was avoidable.

What the particular Hopi prophecy on the `Great Purification’ refers to, in fact, is what we have been witnessing at a steadily increasing rate in daily news, and sometimes more directly in front of our eyes where we live. This purification is happening on every continent, to include geological upheavals, and increasing economic, political and social chaos.

I once had the privilege to be at a traditional gathering where I heard, in person, Hopi elder Thomas Banyacya (1909-1999) 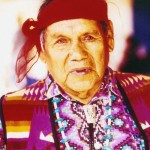 describe the two paths that humans could choose, based on a petroglyph called the Hopi Prophecy Rock. (See photo below.) He carried a hand-drawn replica of this prophecy and described each symbol. The paths were materialism or enlightenment. Different outcomes would follow, in accordance with which path was chosen. Enough said.

Before I provide other website references for this Grandfather’s life work and the message of Prophecy Rock, I first want to return to the example of how and why the Kachina is misunderstood and its spiritual symbolism violated.

I do so to illuminate the root cause of the unfolding dilemma that the Great Purification invites us to address – the loss of our connection to the earth and all the planetary species and elements that support our very existence, and also rejection of our spiritual Source.

First of all, here is a definition of “Kachina” in Wikipedia: “a spirit being in western Pueblo cosmology and religious practices.” I cite this Wiki page intentionally, to show an example of Western cultural bias in the below citation by a Wiki entry source:

“The central theme of the kachina cult is the presence of life in all objects that fill the universe. Everything has an essence or life force, and humans must interact with these or fail to survive.”

The Western cultural bias that I want to identify is the use of the term “cult,” given its present-day, popular usage in reference to marginalized groups which have bizarre practices according to mainstream society. However, in looking up the definition of “cult” in Wiki, it also reads:

“The word originally denoted a system of ritual practices. The word was first used in the early 17th century denoting homage paid to a divinity and borrowed via the French culte from Latin cultus “worship”, from the adjective cultus “inhabited, cultivated, worshipped,” derived from the verb colere “care, cultivate.”

The above shows an example how the original meaning of a word can change so radically that its intention becomes distorted, often negatively, in regard to how it is understood and applied in modern usage.

In other words, the current popular use of “cult” cheapens the authenticity of ancient, longstanding Indigenous spiritual beliefs and practices and – important to note – a spiritual awareness once understood universally among all our land-based ancestors!

Next, to clarify why the commercial exploitation of the Kachina ceremonial figures by Marvel Comics is so profoundly offensive to the Hopi people, I quote here a passage in a book edited by David Howes, titled Cross-Cultural Consumption: Global Markets, Local Realities (1996):

“Prescriptions for individual conduct in ritual, namely a purity of thought, emotion and intention, and prescriptions against the misuse of ritual knowledge, which specify supernatural retribution, are utterly central in Hopi discourse. Dissemination of ritual knowledge, either orally to unentitled parties or ipso facto in published accounts violates ritual sanctity and effectiveness and may damage the spiritual health of the community.”

Elaborating on the root cause of the growing chaos at multiple levels, that the human species experiences today, is to emphasize the abdication of human responsibility to treat each other, and everything that sustains life, with respect, reverence, love and compassion. Further spiritual qualities, universal in the perennial wisdom in all human cultures, such as humility and gratitude, also need to be revitalized.

Prophets in every major spiritual belief system have foreseen certain events that would befall human beings, if we chose to forfeit these spiritual teachings. This perennial wisdom is what unites us as a human family. It speaks to a spiritual reality – that many people reject, at our peril – that all human beings are, in essence, spiritual beings who come from the same Source and will return there.

Thomas Banyacya was one of four Hopi elders selected to travel the world in 1948 and carry a message of peace through relating the Hopi prophecy, after two nuclear bombs fell on Japan. The nuclear bomb was identified in Hopi prophecy as a “gourd of ashes.” That WWII bombing marked the beginning of the trajectory toward the `Great Purification’ unless we could learn how to live as a human family in peace.

Several prophecies are grouped together in visual imagery on the Prophecy Rock. Here is the best photo that I could find to illustrate the original rock, focusing on the specific prophecy about the two paths to choose from.

A number of websites show written interpretations of the `Great Purification’ prophecy. However, I prefer going to a primary source when available, and discovered the only online presentation by Grandfather Banyacya in a YouTube excerpt from the 1986 documentary Hopi Prophecy by Japanese filmmaker Kiyoshi Miyata. This version looks and sounds a bit rough, but please stay with it, because the message is what matters.

My final recommendation is to study a Hopi website about Thomas Banyacya who led a life of remarkable courage and integrity. The website includes the related activities of other spiritual elders and shows links to learn more about the Hopi culture.

May these insights nurture hope rather than despair about how we still can grow and learn how to appreciate each other and work together to heal our blessed planet Earth.