Freedom of Expression for Public Scientists is Vital

One early spring day in 2007, returning to my farmhouse from a trip away, I observed an unexpected change in landscape. I chuckled in disbelief at the sight of a duck swimming in a new pond that had flooded most of the pasture up to the concrete pad beside my barn. This happened during my first springtime in the countryside. I have never stopped being amazed at Nature’s opportunistic, creative interplay between all forms of life.

In more recent years, I now look anxiously across my pasture to the creek, ever hoping it will be filled enough to flood at least part of my pasture once again, temporarily. Doing so assures me that the water table is high, and my drilled well still can provide a reasonable supply of water. I have learned not to take my water supply for granted.

Last spring, the creek itself dried out and, tragically, little rainfall arrived throughout the growing seasons. North Americans across the continent undoubtedly recall the regrettable outcomes – major crop losses, hardships for farmers and higher food prices for everyone. This spring, after frequent, heavy snowfalls – much needed to raise the water table again – the nearby creek has partially flooded the pasture.

But last week in mid-April, an ice storm hit, knocking out power through several days for more than 100,000 people in mid-western Ontario, where I live. Hence, my delayed post.

What stories will the water tell us in the months and years ahead – accompanied by future unanticipated climate events – wherever we live and work? Who will be paying attention and, more importantly, keeping track of important changes in why, or why not, water is continuing to sustain the planet in order to bring health rather than illness into our lives?

Our collective responsibility, as fellow planetary citizens, is to become environmentally or “ecologically” literate by seeking out a variety of information sources. We need to be better informed by consistency of evidence that shows the life-destroying proof where industrial and commercial activities undermine planetary well-being.

The imperative at this historic moment – when the planetary life support system that we depend on is experiencing major transitions caused by climate change – is to protect the freedom of expression for scientists everywhere who are documenting this evidence.

More of us, as Canadians, therefore, need to speak out and stand beside fellow Canadians who already are doing so, raising alarm bells about the ways in which our democracy is being eroded.

Before speaking more about the dangers presented to us, I first want to refer back to something that I stated in my previous blog post. There I had referred to Dr. Masaru Emoto’s research on consciousness of water, insights I emphasized as valuable.

The reason is, Dr. Emoto’s approach acknowledges the fuller holistic energetic dimensions of our interactions with water. Such insights can inspire us with the beauty and the wonder of life’s existence, so that we feel even more compelled to cherish and protect our planetary home.

But, I now want to clarify my critique of empirical science in that same previous post. I suggested a limitation of empirical scientific analysis, that is, such analysis focuses only on what is visible and measurable. Other scientific approaches, however, are based upon more holistic cultural philosophies that give credence as well to what is still unseen and yet unknown to the intellectual mind.

What I want to emphasize in this post is, the suggested limitation of empirical scientific studies, conversely, can be their strength. In other words, showing visible evidence about physical realities can be difficult to disprove, because the rigour of practicing a method of `trial and error’ – that can be repeated by other scientists to confirm evidence – has a significant role, globally, particularly in environmental sciences today.

Indeed, `trial and error’ is the essential playing field of the best creative minds who diligently apply perseverance, patience and, most of all, passion, toward their pursuit of discovery. And, yes, the best empirical scientists are endowed with passion, I would argue, because they care about the larger public good and the well-being of our planet. Through the practice of this uncertain and long term pursuit, the most brilliant, albeit unexpected, discoveries are produced.

Meanwhile, Canada’s federal government already had received a couple of black eyes, internationally, after backing out of the Kyoto Protocol and also losing its bid to have a seat on the United Nations Security Council for the first time since Canada’s previous successful bids. One of the reasons for the latter, cited in several news reports, was Canada’s unpopular position on climate change – namely, dismissing its importance.

The Canadian federal government’s lack of ecological literacy, on top of its apparent contempt for healthy democratic debate, has become even more painfully obvious. Some of Canada’s most esteemed thinkers, as well as international scientific journals, now together are challenging what is clearly politically and economically motivated ideology to silence dissenting environmental evidence by our scientists. It is shameful, and dangerous.

See my blog post “Where the Caribou Live – Part 3” published in January 2012 on that issue. Please read the full four-part series that raises awareness on little reported, yet ongoing, issues.

You know when something serious is happening when, for the first time, scientists organized a public protest on Parliament Hill on July 10, 2012, called Death of Evidence. The speaker at the microphone is Ben Powless, Indigenous Environmental Network, in a photograph by Richard Webster ©. 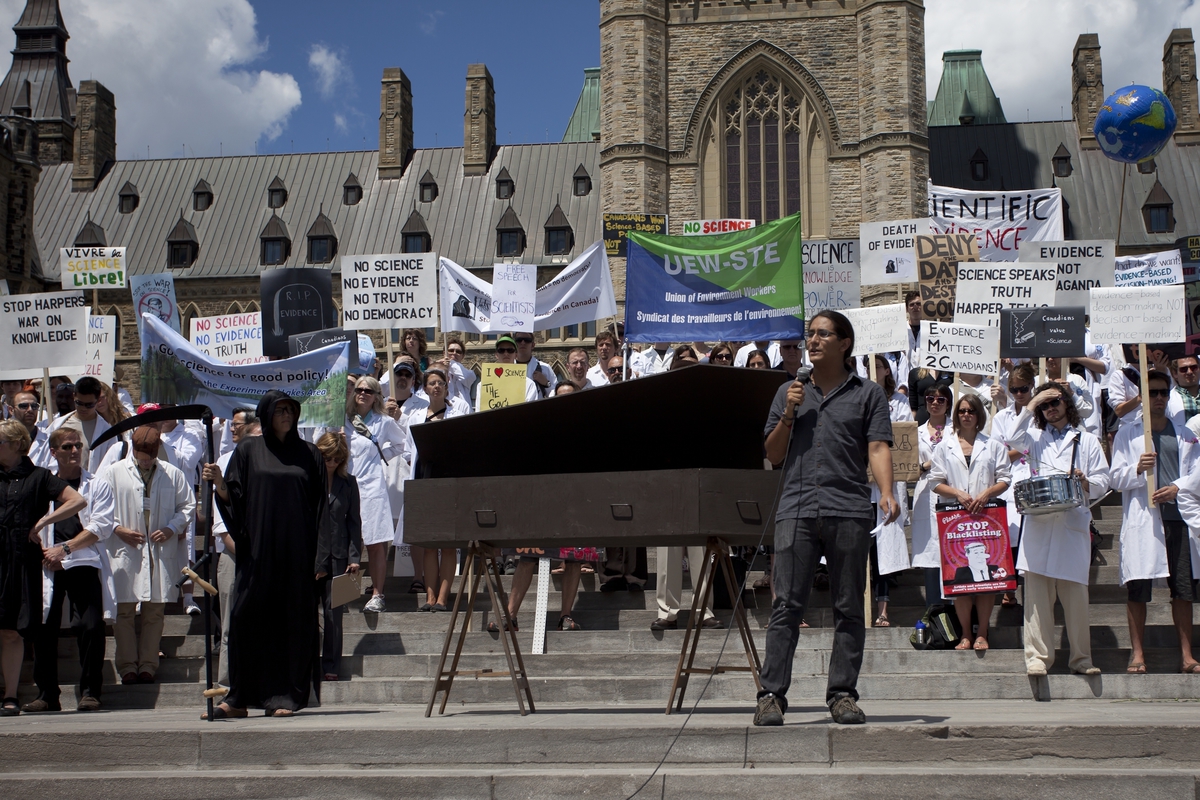 Secondly, the federal government’s actions have received growing major criticisms from internationally respected scientists. Third, some of Canada’s own finest intellectuals have pointed out both the scientific short sightedness, and also the blatantly obvious ideological motivations, behind the government policy attacks on freedom of expression.

The latest challenge to what politely can be called misguided federal public policy is an investigation by the Office of the Information Commissioner of Canada regarding not less than seven governmental institutions impacted by the federal government cuts. The official notice, released on April 2, 2013, indicates the acceptance of a formal complaint submitted by the non-partisan Democracy Watch and Environmental Law Clinic of the University of Victoria, in British Columbia.

The most outrageous federal cut to Canadian environmental research targeted the long term Experimental Lakes Area (ELA) project, recently terminated. The full story of why the ELA received international acclaim through many years, and details about the widely condemned funding cut, is well outlined in the Wikipedia entry.

David Naylor, president of the University of Toronto, whose background is in the field of medical research, gave a March 2013 speech at the Empire Club – an edited version in The Globe and Mail. He outlines why the trend, especially within the past five years, in short-term, applied research is not improving Canada’s innovation and competitiveness in the wider world. Naylor also points out: “Everyone forgot that the private sector – not universities – ultimately drives commercialization,” and later adds: ” there are very good reasons why great basic, disruptive, fundamental [long term, trial and error] research matters.”

“Without the kind of vigorous debate and knowledge that comes from having citizens informed by open discussion of science and information, we can’t even hope to have a proper democracy. A strong economy is important, but the biosphere is more important.”

In my research to find voices from diverse sectors on this issue, my biggest surprise was to discover Jeremy Grantham. He is a British financier who identified his specialty in “investment bubbles not science.” Grantham proclaims bluntly in the international scientific journal Nature that more scientists need to speak out, because the human species is facing a resource [i.e. food] crisis exacerbated by global warming. He writes: “The seriousness of this change is not appreciated by the politicians and the public.”

Grantham is not alone in declaring a perceived lack of concern by the larger public. One of Canada’s finest sages, a seasoned researcher and intellectual, seen regularly on CBC-TV and TVOntario, is Allan R. Gregg. His voice is a consummate example of “reasoned discourse,” a voice that can examine and interrogate very astutely all points of view. Gregg writes:

“…I’ve begun to see some troubling trends. It seems as though our government’s use of evidence and facts as the bases of policy is declining, and in their place, dogma, whim and political expediency are on the rise. And even more troubling…. Canadians seem to be buying it” [September 5, 2012].

Can we collectively prove Grantham and Gregg wrong? In Canada and elsewhere in the world, are we willing, as planetary citizens, to challenge the government where we live, if and when it tries to silence reason, suppress environmental awareness and the knowledge required for us to survive on, restore and protect, an imperilled planet?

The first task as concerned individuals is to understand the issues. My blog readers know that I always make the effort to provide a sampling of good resources to look up.

In this case, particularly for fellow Canadians, I highly recommend Allan R. Gregg’s blog post “1984 in 2012 – The Assault on Reason,” based upon his presentation at Carleton University, Ottawa, in September 2012.