I heard an ominous thud on the window, and saw a bird drop into the bushes. In early spring, the twigs are dry, brittle and sharp. Would the bird still be alive? I donned boots and gloves to rush outside and extricate a stunned, very startled, yet blessedly still living bird. He was entangled in a jungle of twigs crushed by the heavy, relentless snowfalls of a long winter. I spoke to him softly, and tenderly lifted him out, so as to avoid further injuries. One eye was closed. His head darted side to side, while his racing heart thumped visibly.

The bird’s talons had grabbed onto my gloved finger, and held on for dear life, or so it seemed. According to a later internet search to identify it, the bird looked like a juvenile downy woodpecker, precisely as the bird looks here in the photo. I gently stroked his head and back, a red cap covering his head fully (unlike the adult male).

I continued to express my affection and reassurance that he is safe now. In no way did I want the feral cats of the neighbourhood 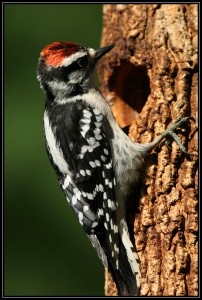 to have him for lunch. These cats prowl my land, and keep down the mice population. But, seeing them prey on birds is not pleasant.

What if the woodpecker can no longer fly? I decided to seek the advice of my neighbour Bob, a retired farmer. The bird and I took a stroll down the road, although I kept hoping that he would feel strong enough to fly away. As Bob and I discussed the situation, the bird finally flew off my hand. He reached a nearby tree, hooking his talons onto the trunk about eight feet off the ground, his heart still visibly thumping. Bob reassured me that his barn cats rarely climb trees.

Living immersed in the world of Nature, every day I am reminded of the sacredness, and vulnerability, of all creatures. This is not Disney World. The uncertainty of life is a fact, and a teaching, to learn how to be fully present in each moment of beauty and joy.

A rather large raccoon in my barn appears to have met a fate less fortunate than my woodpecker. Some days ago I began to explore my barn regularly, the nearby creek’s overflow reaching the eastern barn door. Empty of domestic animals, my barn’s intermittent wilder occupants recently included a raccoon that I initially hoped was only sleeping. Each visit I looked through the doorway of the large stall area, not getting closer to it, because raccoons can be vicious and/or carry rabies. The visible raccoon, in the same position through several days, at least found a dry, final resting place.

For the flooding in my region this early spring has been major. Time alone will tell how the web of life in the natural environment has been impacted, as well as farmers’ crops. My small pasture beside a creek had transformed into a pond, while neighbours’ larger fields and woodlots became small lakes. The land must dry out, or thaw out (after the most recent snow and sub-zero temperatures), before deceased animals can be buried, or be relocated in the bush to rejoin the cycle of life in the natural world’s food chain.

So, you may ask, how do these encounters relate to the still point where activism and contemplation meet? What is so different today from my earlier life – swallowed up by non-stop activism – is paying attention to self-care, and also being present in the moment more often.

Hence – the still point. The simple act of rescuing a bird filled my heart with joy. As for the raccoon, I felt compassion and serenity in acknowledging that the animal’s life had ended in reasonable comfort, given the bed of straw indoors.

At the `still point,’ our consciousness merges with the sacredness of life itself, in which acts of caring are in the moment yet timeless, with no thought about past or future. We also let go `attachment’ and control over the cycle of life and its mystery.

The above passage is a renown excerpt from the first of four poems by 20th century poet T. S. Eliot, known collectively as Four Quartets, the first poem titled Burnt Norton. Looking up references to Eliot’s “still point,” many online sources exist. However, I found the fewer number related to Eastern philosophy the most illuminating.

Eastern scholars point out Eliot’s study of Sanskrit and Eastern philosophies, such as Hinduism and Buddhism. These scholars, furthermore, have explained at length how symbols and imagery from such Eastern sources influenced his writings, including the Four Quartets.

Eliot Scholar Nidri Tiwari, in her book Imagery and Symbolism in T. S. Eliot’s Poetry (2001), uses “archetypal criticism.” She identifies this form of criticism as having a parallel emergence in an age torn by the anxiety of two World Wars and, moreover, an age dissatisfied with scientific and materialistic concepts of humankind. Hence: “The archetypal approach sought to restore to man the entire humanity.”

(The late James Hillman’s classic work Re-visioning Psychology (1992 edition), which I recently read, similarly illuminates the significance of archetypes. Hillman argues why they ought to be paid much more attention in the field of psychology.)

P. S. Sri’s T. S. Eliot, Vedanta, and Buddhism (1986), reviewed by Alan Jacobs, calls for more recognition of such Eastern influences upon Eliot’s vision, a vision that was implicitly spiritual and a fusion of Indian themes with a Western worldview.

In contrast, a Wiki entry on Burnt Norton, regrettably, totally omits mention of the Eastern influences upon Eliot’s writing. Worse, the Christian themes in his work are characterized by several critics as diminishing the greatness of the writing. George Orwell, for example, said as much.

The criticisms in the aforementioned Wiki article illustrate to me once again, – as I have stated a number of times in earlier blog posts – the fractured consciousness of Western culture. The Western mind has been socialized to be overly analytical and dualistic, and does not comprehend holism with ease.

By the way, Eliot is not above criticism; for he had human flaws including prejudice. Regardless, as a man of his time, he made an effort to make meaning of the plight of humankind, and seek some resolution through his particular spiritual quest.

So often these days I hear references to this historic moment as Orwellian. Indeed, Orwell was a visionary about what would befall human beings, if we were to succumb to authoritarian oversight inserting its ubiquitous presence into our daily lives, in various insidious ways. `Big Brother’ is evident, and increasing, because of too much human complacency, rather than more of us proactively acting on moral responsibility to protect democracy, where it still exists and is slowly being chipped away.

As for activism and contemplation, you may next ask me: “How can a person seek to make a difference while, apparently, living “away from it all”? My answer is, sad to say, there is no “away from it all” or safe place on this planet any more.

My purpose of relocating from a large city, in fact, seven years ago was not to run away from an urban environment so obviously out-of-sync with the planet’s life support system. Rather, my intention was to journey towards a deeper understanding why we, as a human species, have become so misguided in how we live on this earth.

To become a more effective helper in the wider world, I intuitively recognized that I needed an environment that would provide opportunities to pull me out of my head – emotionally stressed out, overly analytical, and intellectual – into my body.

Indeed, I wrote a doctoral thesis on this very topic, how helping professionals and activists tend to overwork in helping other folks, and burn out repeatedly, because we ignore our own inner emotional and spiritual needs. Renewal of energy is essential.

Meanwhile, since early last year, I now find myself deeply engaged, with a local group of concerned citizens, actively fighting against the insanity of a proposed nuclear waste dump, planned close to the shore of Lake Huron. (Among several blog posts last year on this topic, read “The Yin-Yang of Democracy – Use It or Lose It.”)

While still living full time in the city, I had begun the practice of contemplation. Choosing to embark on an inner journey, in other words, can be initiated anywhere. For my own pursuit, I chose studies and training in the concepts and practices of psychosynthesis, which I have woven into my daily life.

Wherever we live, restoring the planet’s health requires honest awareness of the incompleteness within each of us, and the willingness to develop practices that guide us towards wholeness.

The journey of personal transformation is inextricably linked to global transformation. The reason is, we experientially – in our bodies – come to appreciate how human life is interwoven into planetary life at multiple levels of energy. 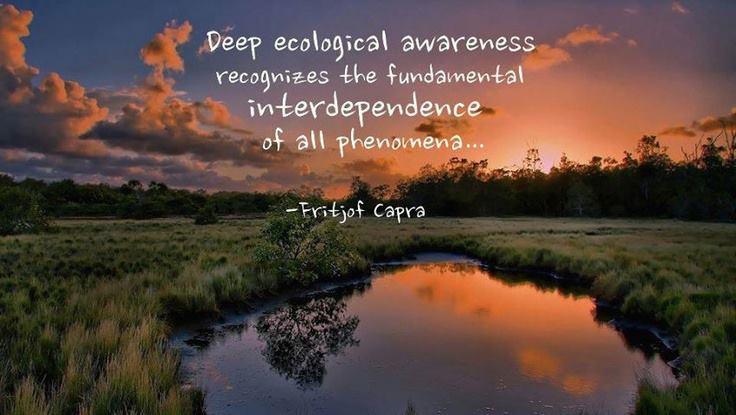 One simple revelation, for me, has been the discovery that life-affirming physical labour in a natural setting not only grounds a person’s whole being yet, moreover, lifts the spirit. Physical work on my homestead also instills humility, gratitude and grace, to feel blessed in experiencing cleaner air, the beauty of the stars at night, and witness the rhythms of Nature replete with the freshness of surprises each day.

Activism and intellectual contemplation, meanwhile, could be said to be two sides of the same coin. Both pull our minds into the past and the future, to challenge the status quo and how it became established, in order to transform what the future can hold.

Yet they also differ, and offer a counterpoint to each other. Activism often incorporates public, group expression to advocate for external changes within the collective society. Its focus is outward, to challenge institutional structures, considered to be rational systems. At its best, activism seeks the larger good by advocating for more effective social and environmental justice.

Spiritual contemplation, although possible to practice silently in groups, can be a private, individual, inward journey, whose process and outcome is organic rather than constructed. Its focus is the understanding and transformation of one’s own consciousness. Paradoxically, a person then can begin connecting with different levels of consciousness – that also could be referred to as different levels of energy – to experience the interrelatedness of our individual soul with other beings and the cosmos.

My personal belief is, the weakness of much well-intentioned activism is the omission of understanding how the external forms that we create are profoundly influenced by the invisible and internal patterns of our unconscious. Without this recognition, the same flaws in human systems and institutions get repeated, even if their external forms look different. Authentic global transformation calls for healing the split in human consciousness.

Today, what holds back individuals from co-creating a better world is not a lack of technology, a lack of money, or a lack of information. What holds back any person is simply a lack of caring, and a lack of will to make a difference.

Transforming our consciousness, regardless, is possible to begin every minute of every day, through a simple act of will.

That possibility is a story for another time.

PHOTO CREDIT: downy woodpecker (juvenile male) by Liz Stanley – Check out her website www.overlookcircle.org, an impressive example how a citizen can engage in environmental awareness regionally, and creatively.