Freedom of expression – do you take it for granted? If so, think again, and be aware of economic and political forces that, slowly and steadily, have been chipping away at the capabilities of, and outlets for, our independent thinkers and contributors to cultural production throughout Western society. As a Canadian, I will focus on what is happening in Canada, although similar trends undoubtedly are unfolding elsewhere, because of globalization.

First of all, more than twenty years ago, media corporations began to swallow up independent news media producers in larger and larger mouthfuls. Many freelance journalists were silenced, and even staff journalists – up to recent weeks in Canada – continue to lose jobs in major newspapers. The result is the deterioration of journalism.

Secondly, the Canadian federal government in 2007 and 2008 initiated major cuts to the arts and related cultural industries that, once again, diminished our cultural production. Creative professionals use all forms of cultural media, not limited to news, yet also nonfiction and fiction writing, theatre, dance, music and a range of visual art forms that include documentary and dramatic film. Several schools of training were forced to close, as well as various archives, or forcibly shrunk for lack of funding.

Third, universities have been going down a controversial road of increased corporate financing of departments that influence choices of research, even prior to the severe 2008 economic downturn. Consequences of the latter, however, included loss of major private sector endowments, hence, fewer tenured and more sessional professors, larger classes, and a growing tendency to use doctoral students to teach under-grad courses.

Fourth, adding to how our historical archives already are compromised, the latest blow by the hand of Canada’s federal Conservative government led by Prime Minister Stephen Harper is the muzzling of Canada’s science research community. (See my 2013 post “Freedom of Expression for Public Scientists is Vital.”) 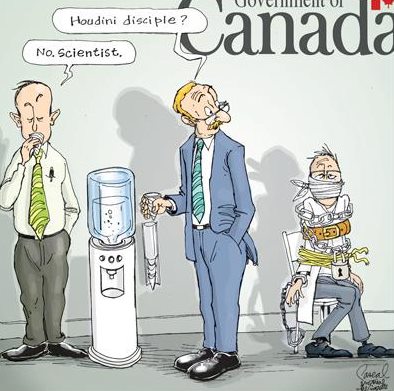 What shocked me, in watching fifth estate, not only are the terminations themselves (immediate without notice). But, moreover, the contempt exhibited towards individual federal scientists who had dedicated a lifetime to their respective fields of knowledge and, worse, have been denied access to their own life’s work.

My outrage barely begins to describe what I think of Harper’s actions, which are not simply ideological, but are, in a word – ignorant. His actions, moreover, are dangerous to the sustainability of a well-informed, truly democratic society, and undermine the human and environmental health of a nation state that formerly won international acclaim.

Harper, during his years as Canada’s Prime Minister, has distorted truth, obfuscated facts, censored debate in our parliament, even proroguing it when convenient to his ideological trajectory of single-minded industrial economic development that dismisses serious existing and future environmental concerns.

Well, at this point, you might be asking: Now tell us what you really think?

Actually, I want to communicate here some shared concerns of fellow Canadians from their responses by organizations and in news stories that recognize what we are losing. For there is a ripple effect from this unconscionable destruction of knowledge.

Let me point out, first of all, that the actions of Harper are more than a critique of partisan politics. The fact is, not all Conservatives agree with him.

For example, I read one recent comment on a news website by a person who identifies himself as a member of the Reform Party when Harper was one of its leaders; but today he feels betrayed, and writes: “We now have one of the most autocratic, secretive, and environmentally unfriendly governments in history.”

Another critic of Harper’s actions is Tom Sidden, a former federal fisheries minister in Brian Mulroney’s Progressive Conservative government. As a 2014 CBC News online post reported, Sidden introduced many of the environmental protections that were taken out of the act in 2012. Note Sidden’s response to one of the latest actions by Harper:

“I call it [closing libraries] Orwellian, because some might suspect that it’s driven by a notion to exterminate all unpopular scientific findings that interfere with the government’s economic objectives,” Sidden told CBC.”

A recent press release by The Writer’s Union of Canada (TWUC) emphasizes the national tragedy of Harper’s closing of federally established research libraries across Canada. For example: “The legacy of a century’s research into Canada’s most vital resource – water – has been dismantled and worse, in some cases, discarded.”

The Professional Writers’ Association of Canada (PWAC), in which I have been a member for 30 years, identifies several examples of losses to our collective knowledge as Canadians. The press release emphasizes: “Freedom of Expression and Access to Information are two principles that must apply to any healthy civilized democracy. Its press release includes a cautionary note:

“What emerges is a clear pattern: the deliberate downgrading of knowledge itself and a refusal by our own government to allow us to access it.”

Access to information is becoming more difficult not just to scholarly researchers, yet also for all Canadians, which violates a right stated clearly on a federal government website: “Every person in Canada has the right to request access to government records… This right is essential to foster greater government accountability and transparency.”

A person, therefore, could reasonably ask, what happens when information not only is difficult to access, but no longer exists?

Canadian Journalists for Free Expression (CJFE), in its “2012/2013 Review of Free Expression in Canada” reported: “The Department of Fisheries and Oceans is at the bottom, with a grade of `F,’ singled out for its zeal in muzzling scientists and keeping critical research findings from Canadians.”

In the above-mentioned fifth estate episode on CBC-TV, Peter Ross, cited as Canada’s only marine mammal toxicologist, points out that in the spring of 2012 the federal government closed the Department of Fisheries contaminants program, dismissing Ross and 55 of his colleagues across Canada.

Tom Duck, professor of Atmospheric Science at Dalhousie University, helped found the world-renowned Polar Environment Atmospheric Research Laboratory (PEARL). But, similarly, in 2012, the budget was cut, his research stopped, and most of his colleagues left the country to find other work.

The above examples, and others, are outlined in CBC’s online news story that refers to the content of the televised episode of fifth estate, “Silence of the Labs.”

The Canadian Science Writers Association (CSWA) is not alone in denouncing the Harper government as “Orwellian.” Its press release contrasts Canada’s current federal government with previous governments which encouraged federal scientists to openly discuss their work with the media and public. Commenting on federal politicians today:

“As the journal Nature, one of the world’s top science journals put it, the Harper government’s policy is a “Byzantine approach to the press, prioritizing message control and showing little understanding of the importance of the free flow of scientific knowledge.””

This CSWA website, moreover, provides a long list of articles of concern published from sources that include the international press. The world is watching. 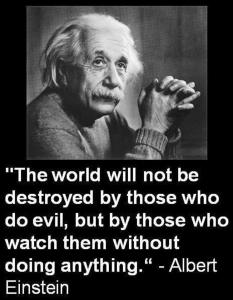 To sum up, how will this pattern of limiting, censoring, and erasing, Canada’s scientific research affect us in the near future as citizens, and for current and future generations of science students and professionals?

Do you wonder what types of research no longer can be studied in Canada’s universities? What types of jobs will be available for the next generation of scientists? Can we expect another brain drain?

How can we protect the imperiled health and safety of our nation’s natural environment, without fuller and deeper awareness that is our right in a democracy?

Be worried, be outraged – and take action to demand a stop to Harper’s path of destruction.

Remember. The vitality of a democracy resides in the active participation of its citizens beyond, yet including, in whom we place our trust as political decision-makers.

Happy New Year, and let us make it so.