Let Us See What Love Can Do

Elephants have been very much on my mind lately. Their very existence is under threat more than ever, and we need to act now to avoid their extinction. Similar to so many non-human species for whom we now appreciate their fuller intelligence and ways of knowing, elephants’ capacity for love is magnificent. Some days ago I watched three TV documentaries in a row about elephants, after seeing the latest petition on the continuing global struggle to stop ivory poachers. Visual imagery, of course, radiates directly into our hearts, with the power to transform consciousness, and why documentary films are so important to engage us on the human and planetary issues of our time. Indeed, simply watching a film story can change our life and the life of other beings.

Bearing witness to the communal spirit of the extended families and clans of elephants, persevering through migrations of hundreds of miles each year to forage for enough food and water to survive, while contending with ever-present threats, was mind-boggling. Threats range from four-legged, and two-legged, hunters, while also dealing with deforestation, land encroachment by human settlers and, of course, continuing loss of habitat exacerbated by climate change. The most important, and imperative issue right now, to avoid the extinction of elephants, is to support a global ban on the ivory trade. Please look up the petition to persuade the European Commission to agree to support the ban at “Avaaz – Europe: Stop the elephant slaughter.” 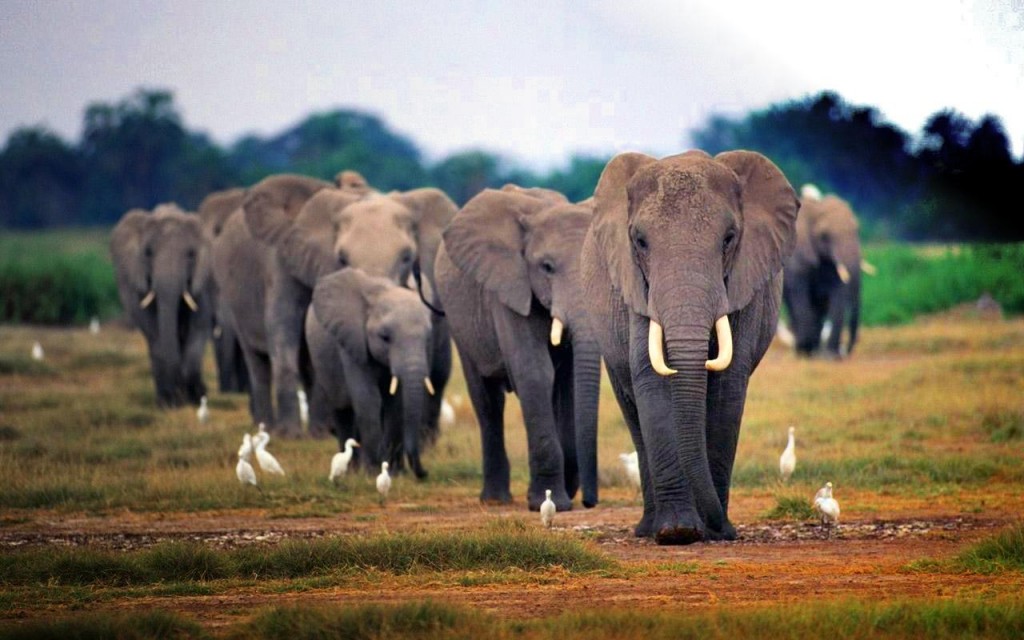 If you become deeply affected, as I do, in body, emotions and soul, by the troubles in the world that can seem overwhelming, find the ways in which you can express love. Doing so is how I maintain my will to stay alive, and rise above depression.

Acts of kindness are possible every day, from signing a petition, or personally rescuing an animal or bird from harm, to giving support to a person in need. Sometimes the outcomes are unknowable, while the interventions nevertheless can be urgent. Other times the visible results can be immediate to celebrate. Through the earlier months of this year, in fact, I experienced circumstances that required urgent attention and, more recently, was tremendously blessed to receive loving care and assistance through the physical presence of friends who happen also to be Friends.

In mid-June, a number of members in the local Quakers/Friends worship group visited my homestead. (They had welcomed me into their fold close to two years ago, thus bringing more regular emotional and spiritual support into my life, given my loss of family.) Their proactive compassion and communal values are a model to the wider world in regard to what is possible for people still to come together and accomplish tasks collectively – doing so with grace, joy, and even gratitude.

Indeed, what I found awesome was not only the generosity yet, unexpectedly, their gratitude expressed to me in offering to them an opportunity to do a `work bee.’ In other words, a work bee was not perceived either as a moral duty or sacrifice or carried out with an attitude that the helpers see themselves at a different level of existence by any measure from whom they are helping. Despite their own sufficiently busy lives, the Quaker ethos perceives a `work bee’ – physical labour accompanied by moral and emotional support – as a normal activity to extend to fellow human beings. These acts of kindness, moreover, are carried out in a spirit of joy.

I can verify how everyone, visibly, was having a grand time! Weather on that wonderful day was perfect, sunny but not too hot nor humid, with a cool breeze. In three hours, the group accomplished what would have taken me the entire summer to achieve. Aside from stacking eight cords of newly arrived firewood against a fence, other activities focused on reducing the overgrown jungle of bushes, vines and weeds that had become too daunting for me to tackle.

My total homestead is two acres, with two pastures and a barn. I provide access to my closest neighbours who, in turn, plow me out in winter, plus help with other occasional tasks. That barter arrangement is a life-affirming exchange, and example of how folks who reside in the countryside recognize the mutual benefits of extending thoughtful care to each other. Relocating here ten years ago was the most soul-fulfilling decision that I ever made in my life. The bonus: the world of Nature heals us through continually teaching how to appreciate our interconnectedness with, and care of, all beings.

Regarding the Quaker work bee, it closed with a celebratory potluck dinner in my large living room (built by the previous owners), whose picture windows look out upon my neighbour’s cornfield blowing in the wind. The feeling of celebration definitely was shared. Nevertheless, I felt especially gifted by this first experience of having a group of folks in my home, who genuinely wanted to be there, an event for which I had waited and hoped after an extended period of intermittent, unexpected, house repairs.

Indeed, the experience of yet another creosote fire in an old wood-electric furnace last February grew into a major crisis, from which it took several months for me to recover. (Hence, the work bee.) The old furnace was declared unsafe. I existed without sufficient heat through six weeks during the heart of winter, also becoming ill with flu and bedridden much of the time. The photo shows snow halfway up the cellar door into the furnace room during the crisis. 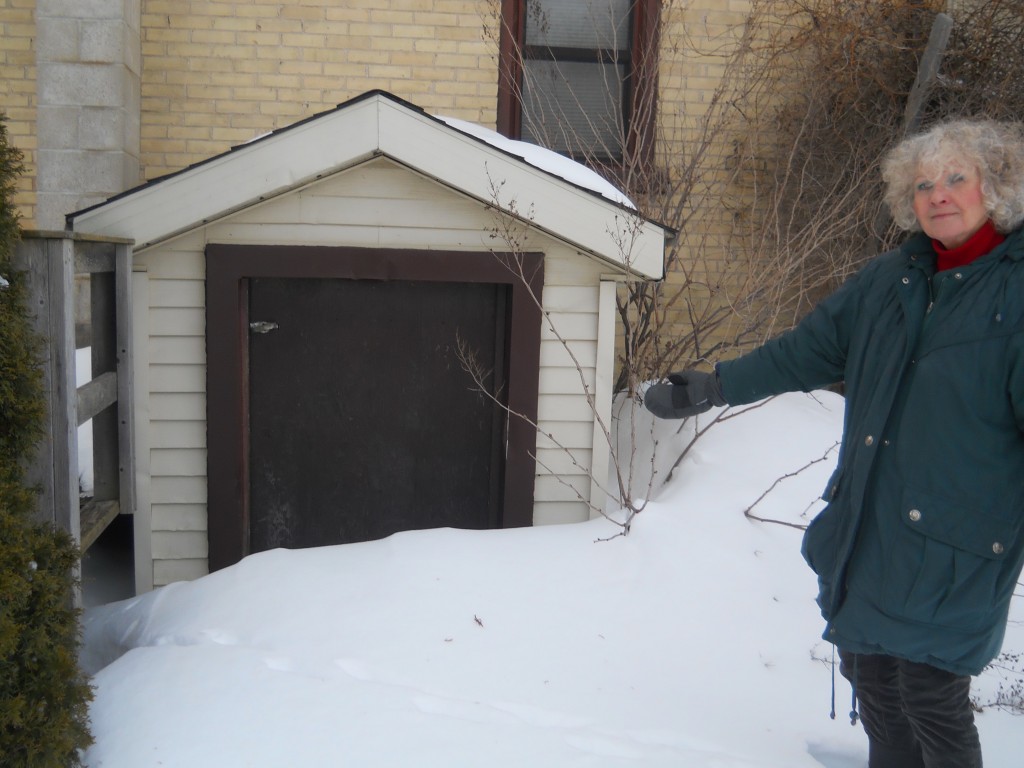 I researched heating systems as well as crowdfunding sites on the internet, choosing a new wood-electric furnace, partly because I know how to use it. But also, importantly, I trust both my chimney sweep and electrician, impeccably; indeed, they know my century-old farmhouse inside out. Through ten weeks of online campaigning, I raised the greater part of the costs. Among the good-hearted folks who offered financial help were individuals who appreciate my nuclear waste activism (which continues).

Crowdfunding is not for the faint-hearted. Never again will I do it. Such campaigning requires courage, tenacity and swallowing large dollops of pride, in raising funds for a personal emergency. Ultimately, it is emotionally draining and, eventually, I began experiencing the worst bouts of depression in my life. Never before had I ever felt so frightened and vulnerable, in exposing myself so personally to the larger world.

Please know that I outline my experience of crowdfunding not just to caution about the pitfalls. But, more importantly, I still would advocate crowdfunding as one of the valuable, and growing, movements of our time, given the fact of our present and future economic uncertainties. Increasingly, we are being called to recognize what we hold in common as a human family, and learn to care better for each other.

While much social resistance continues to exist, this historic moment is calling us to go beyond criticizing, and scapegoating, in regard to all that is seen as wrong in the world. Instead, we are called to do the much harder work, to come together across our differences – at every level of society and across levels – in order to transform economic and political systems in which inequality is embedded.

For folks who seek more fairness of treatment, work with kindred souls to create new possibilities. This is a journey both adventurous yet also beautiful, when it is pursued with love, not hate, and a compassionate, not judgmental, heart. Look to the folks already setting the example, in non-violent groups and movements that are challenging every type of injustice.

As for the personal crises that sometimes are characterized as “the dark night of the soul” (and which I have experienced several times throughout life, once almost ending it), what I learned to give me strength is to listen to the tiny voice within, that whatever befalls us, we need to make meaning of it. Dealing with the unpleasantness in life is painful. But, tackle it we must. For the road to spiritual maturity, and growing closer to our human potential, is life long and never finished.

Even when we are blessed with the presence of caring people in our lives, through times of hardship and trauma that can really wallop us, how we respond, ultimately, is our own responsibility, to deal with adversity in order to grow and move forward.

Thank heavens, when `the unexpected’ happens in life, such events are not limited to crises yet also include uplifting, transformative moments.

Homeward bound, following a worship meeting one Sunday, as I drove along a narrow countryside road, I soon encountered a very large cow standing in the middle of the road sideways across both lanes, uninterested in moving as she stared at my car. It was really funny, and I giggled, slowing down to a full stop, and reflect on a course of action.

At that moment I sensed my body opening up with a lightness of being, which restored the feeling that it is good to be alive. This event was a major turning point in which I felt lifted out of a sadness that had flattened me through several weeks.

The carefree cow eventually sauntered to the roadside, and I decided to track down the farmer who owned it. Choosing the first driveway as a logical start, at its other end I came upon two pre-school age Mennonite children, beautifully dressed, as well as a tall young bearded man, wearing a broad brimmed hat.

I climbed out of the car, and noticed in the distance a young woman stepping out of her home onto the porch, and appreciated her vigilance in regard to the children. Sure enough, the errant cow belonged to this farmer, and he thanked me. I offered to take him down the long driveway to the road. He politely refused, thanking me again, instead choosing to hop onto his horse to fetch the cow.

Travelling again on the road, I could see that the cow, enjoying her freedom, now was heading to the hilltop on the other side of the road, and would disappear from sight. So I turned around to notify the farmer, on the road further back. He then galloped into that field. As I slowly drove away, the last picture visible in my car’s rear-view mirror was the vision of the cow hustled onto the road again, with the farmer close behind on his horse.

One of the most exquisite lessons in living that I have learned, and continue to experience serendipitously, is that when you take the time to slow down, and give full presence to the moment unfolding, the sweetest experiences can happen.

Each day, whether through crises or ordinary moments of bearing witness to life, be grateful for something and focus on who and what is keeping you alive, reach out to connect with fellow human beings, and embrace the simple and tiny opportunities to express, and receive, love.

POSTSCRIPT: “Let us see what love can do” is a quote by William Penn, a historic American Quaker.